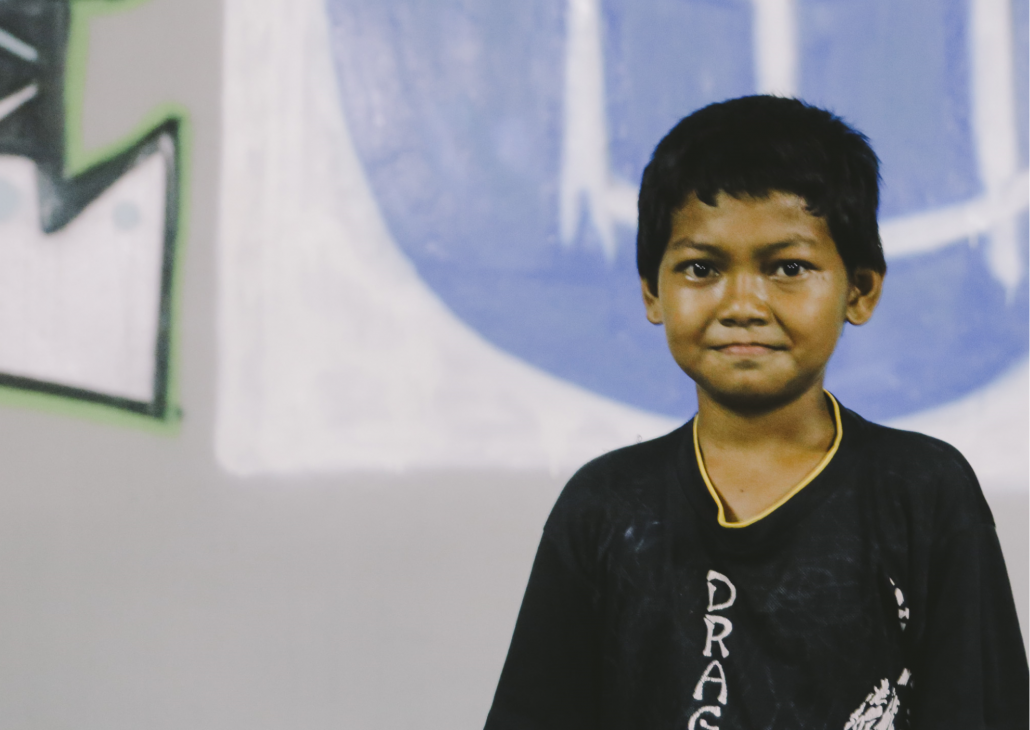 When Komang first came to AK about a-year-and- a-half ago he joined a jiu jitsu classes and was lacking in confidence. The first time he came to class, while the other kids were pulling down gis and putting them on, Komang stood back and looked baffled. Geoff Collins, the Akademi Kristus Coach, helped Komang into a gi and they began the class.
It was initially quite frustrating to teach Komang, Geoff would demonstrate a technique and ask if there were any questions, then the class would split into pairs to practice what had been shown. Komang would sit, ready to do the technique but would not move. Geoff would coach him through step by step, while Komang repeatedly expressed ‘I can’t do it, I can’t do it’.

Before long, Komang gave up on jiu jitsu and instead joined the arts and crafts and English classes run by Erma Collins. At 12-years-old he was the oldest student and he looked a bit out of place sitting on the small plastic chairs. It didn’t take long for Erma to question if Komang was ok and to notice that he had no confidence. Gently Geoff and Erma spoke with Komang to find out his story. Komang should be in grade three or four but he had never been to school. Komang was illiterate and his lack of confidence stemmed from there.
With a lot of encouragement Erma began to teach him to read and write. Several months later, Akademi Kristus facilitated the enrolment of six students in a private school on a sponsorship program. The school guarantees that students will remain there from grade one to grade six and they provide free uniforms, books, snacks, lunches and a drop-off and pick-up service.

Geoff and Erma arranged with the parents to enrol their child and set a date for everyone to visit the school. They picked up five of the kids and their parents on the day, Komang and his mum were last. When they arrived at their home, Komang was hiding under the bed. It took 30 minutes and a lot of coaxing to get him to visit the school.
When the kids arrived at the school they thought they were at Disneyland. The school has multiple playgrounds, a swimming pool, library, toilets and air conditioners in every class, the children were very excited to begin their education.

All of the students were enrolled in grade one, Komang still looks a bit out of place, being several years older and much taller than all of his class mates, but Komang has come alive. The opportunity to go to school, as all kids deserve, has brought out the best in him.

After just 3 days of school, when the kids came to AK for their regular class, Erma said ‘Wow, they have changed, there is much less fighting’. Now, several weeks on, Komang is a new man. He greets people with confidence. He holds his head high. The team at Akademi Kristus can’t help smiling when we think of the future all six of these kids have now and how different it would have been if AK hadn’t been there, changing lives and bringing hope.